It's been a couple of weeks since my last post and the flax is actively growing. The first pots of flax are flourishing. The second planting, not so much. So, why, is the question? 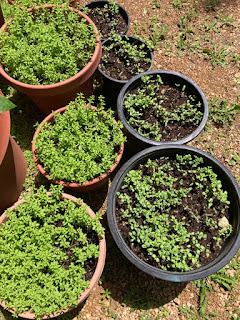 The first planting, on the left, is crazy healthy. The second planting, in the black pots on the right, was planted only a week after the first crop. The soil is from the same potting soil bag, and the planting depth is the same. The only two variables between the plantings are the pots being black and the seeds having been planted a week later, in late May. Did the soil get too warm in the black pots for the seeds to germinate correctly? Did perhaps just one week later in the month make a difference in the seeds' viability? It's curious. I am leaning towards a combination of warmer soil and later planting as the problem. Flax likes cool weather for germination, just past frost. Late May in Minnesota is pushing the limit. Even though this May has been quite cool overall, the sun is at a higher angle and that may be a bit too much for robust flax germination. I will assume that just one week can make a difference in the final outcome. I see the lesson being: plant just after the danger of a hard frost—typically mid-May in Minnesota. Don't wait until the end of May in this latitude! It will be interesting to see if the last planting grows any differently as the season progresses. 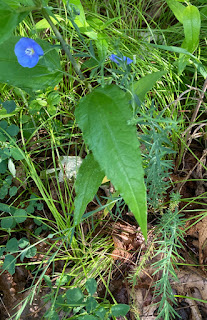 Last spring, I planted some ornamental flax down by our county road and it is starting to bloom already! Note that this is NOT fiber flax (which is an annual plant) but a perennial ornamental version. The flowers are similar, blue, with 5-petals, but the stalk grows to a much shorter height and has multiple leaves as you can see in the bottom right. (Ignore the large leaf in the middle, the fine, lacey leaves on the right are from the flax plant.)